Binance Ramps Up Crackdown on US Users, Giving Them 14 Days to Withdraw Funds

Here’s What Janet Yellen Has Said About Bitcoin

Why Analysts are Concerned of a 30%+ Pullback

Just a few days after the US election is over, world pharmaceutics giant Pfizer announces that it’s COVID-19 vaccine is 90% effective. The news spread rapidly through the media and sparked a surge of the US indices.

Thus, Dow Jones gained 4,56% reaching an all-time high at 29,616, S&P 500 is up 3.20% traded at 3,620.60 reaching an all-time high, and Nasdaq is up only 1.02% with its own all-time record at 12,005. This significant update from Pfizer gave hope for the sooner renewal of travels as New-Year and Christmas holidays approach, hence stock prices of major airline companies soared as well crude oil prices, as both WTI and Brent are up almost 10%.

Bitcoin is in a danger zone as it is currently traded below the MA100 on an hourly chart and is about to touch important dynamic and static support levels at $14,807.

If the $14,807 support withholds, Bitcoin has all chances to retrace and test the resistance near $15,700 – $15,750, although a 4-hour chart demonstrates that BTC could plummet further. 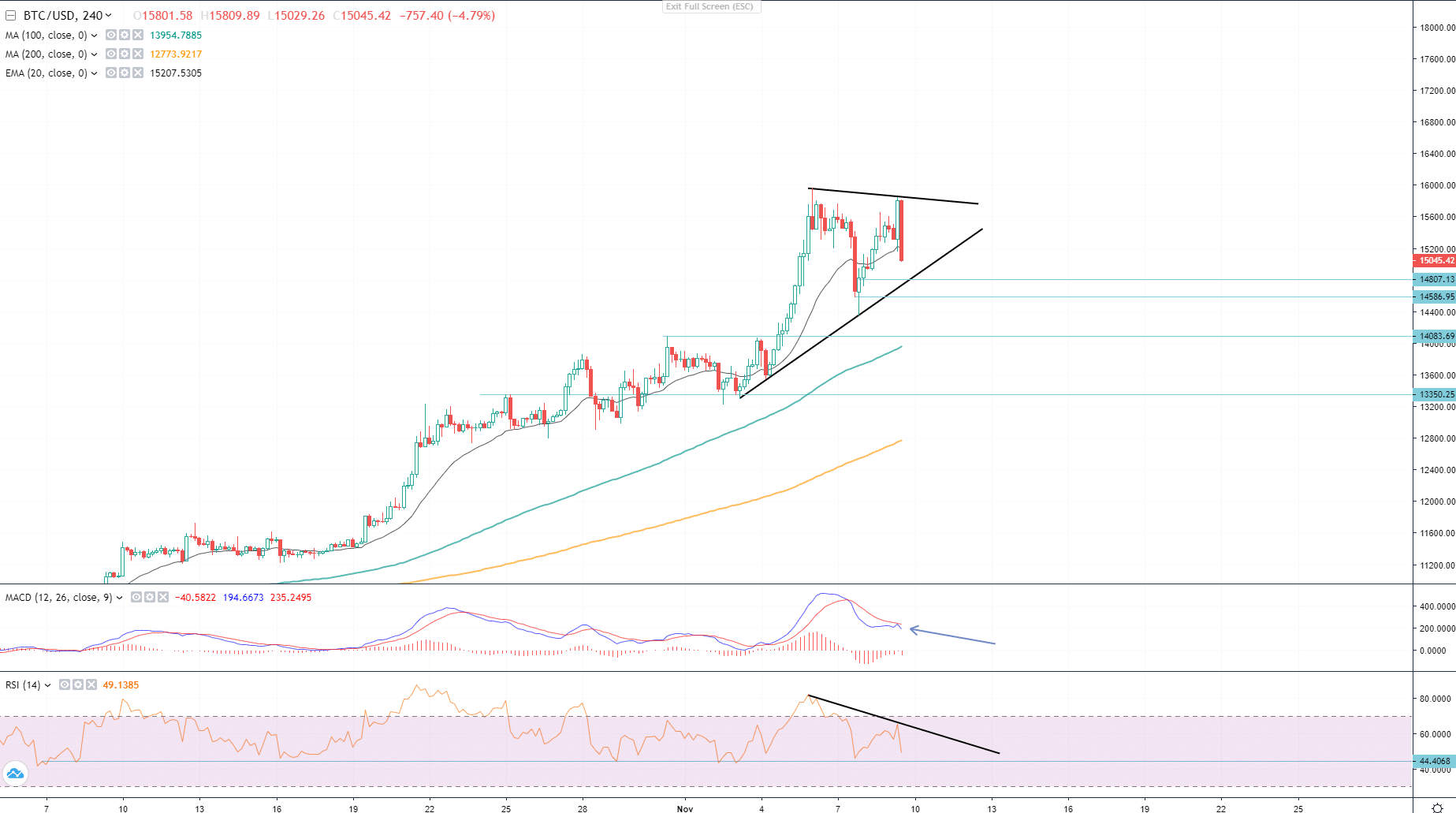 MACD indicator already signalled the divergence of the digital Gold traded against the US Dollar, RSI indicator also shows a heavy divergence, however for the past month BTC never was oversold and created its own mid-chart support level on RSI. As seen on the chart above BTC/USD will drop to $14,083 if it closes below the dynamic resistance, where it will also touch the MA100.

For safe-haven assets, such as Gold, Silver and the digital-Gold – Bitcoin the news does not sound positive and all three dropped by near 5%. The plummet of Gold and Bitcoin can be explained by other major events that will take place this and next month. As the Sale seasons, Christmas and New Year approach there will be a huge demand for cash, though it might not be as high as during the previous year due to lockdowns, many will consider converting their assets to cash to purchase belongings and gifts.

Bitcoin and XRP are not the only currencies whose price has shown such performance. Other altcoins like Ethereum (ETH),...

With Bitcoin supply diminishing over time and mining difficulty on the rise amid heightened demand, the asset is poised...

West Coast Aquaculture (WCA) stocks are now listed on the Sydney Stock Exchange under the SSX code 833.As cryptocurrencies...

Approximately 16,384 validators got involved in ETH 2.0 deposit contract that saw the threshold achieved hours before the deadline.The...

Bitcoin is experiencing a bull run in its price that is comparable to the record set when it hit...