No More Gas Fees with Shadow Staking from SpaceSwap

Binance Ramps Up Crackdown on US Users, Giving Them 14 Days to Withdraw Funds

Here’s What Janet Yellen Has Said About Bitcoin

No More Gas Fees with Shadow Staking from SpaceSwap

Developed by the SpaceSwap team, shadow staking minimizes the number of transactions within the network and makes the process transparent.

The DeFi market is arguably the hottest trend in the cryptocurrency space right now. It is almost at the same level of excitement as the market was in late 2017, though this time, the interest is much more reserved. Furthermore, investors are now warier of the technology, so there are more usable platforms and protocols on the market right now, as opposed to the dime-a-dozen ICO’s that existed in 2017.

DeFi, which is short for decentralized finance, is rightfully a very important topic that most certainly deserves much of the hype associated with it. It has the potential to bring a range of financial services to people all across the world with a minimal barrier of entry. This is the real advantage of DeFi.

The DeFi market has experienced tremendous growth in 2020 alone. In fact, it’s been on an exponential growth trajectory since early 2019, growing from roughly $300 million in January 2019 to its current valuation of $10.9 billion. Individual tokens too have grown enormously in value – YFI, which started out at $30 in July 2020, was worth over $40,000 when at its peak.

But the fact that there is a lot to be gained from lending and staking services is also a major feature of the space. Almost every day, we see headlines relating to yield farming, a particular feature of DeFi platforms resulting in good gains for the savvy investor.

However, it’s not all roses as these yield farmers, who initially made a good deal of profit, have been subject to much loss over the past few months as the market has grown in popularity.

Why is this the case? There are several reasons but the biggest obstacle is gas fees.

What Are the Issues Being Faced?

There are a few key reasons why DeFi investors are now losing money much quicker than before. For one thing, the market is now home to many more investors, so the profit potential is lower as the initial early adoption phase has passed.

But that’s not the only issue. In fact, there’s a far bigger concern at stake — gas fees. In recent months, numerous reports have attested to the rising gas fees on Ethereum, as many users have been executing DeFi-related trades. This has resulted in much more expensive transactions as well as longer transaction times (which also results in trade losses). 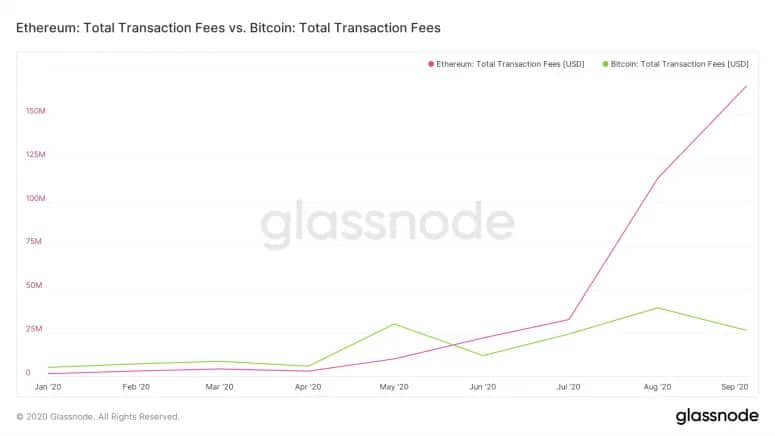 For example, in early September, transaction fees were being recorded at unusually high prices of $15 per transaction. Miners made $166 million in mining fees that month, which even surpassed Bitcoin’s revenue.

To counter this, Ethereum co-founder Vitalik Buterin has suggested a second-layer solution. Specifically, he urged people to use such solutions, “Seriously, scaling to 2500+ TPS for simple-payments applications is here, we just need to… use it.”

Currently, Ethereum still has no answer to these problems. While ETH 2.0 is being worked on, it will take more time before it turns global commercial scale usage into a reality. The truth is, at the present moment, Ethereum-based DeFi transactions can take up a great deal of time and money.

There is also the issue of impermanent loss — a slightly more advanced idea that can hurt investors who are deep into DeFi trading, though it’s something new investors do not have to concern themselves too much with.

In any case, Ethereum has some shortcomings that must be overcome to make the most out of DeFi trades. Fortunately, there are some methods, though they come with challenges of their own.

What about Switching to Another Blockchain?

The most obvious choice would be to use another blockchain for DeFi, like EOS or TRON — but the disadvantages are apparent. Ethereum simply offers the most variety in services and has the most potential in the solutions being developed. The fact that people are complaining about network congestion is a testament to its popularity.

Besides using another blockchain, which we see has little benefit, there aren’t any ways for DeFi investors to work around the problems of Ethereum. They still have to deal with the problem of high gas fees and slow transaction speeds.

Until the arrival of Shadow Staking, that is.

Shadow Staking — the Ultimate Answer from the SpaceSwap Team

Shadow staking is a new means by which investors can get around the shortcomings of the Ethereum network. Developed by the SpaceSwap team, shadow staking minimizes the number of transactions within the network and makes the process transparent. Additionally, it makes the gas fees almost zero. Not quite, but so small that they’re virtually free.

The feature is already available, so users can begin taking advantage of it right away. For example, they can go to the website, choose the Uniswap pool, add liquidity and get their liquidity tokens sent to their wallet. After that, they just have to go to the SpaceSwap Gravity web page again and activate the pool. No additional steps — the SpaceSwap team has put a lot of emphasis on making the feature as accessible as possible.

SpaceSwap uses a two token economy and a reduced coin emission with a focus on providing sustainable farming operations — this is key to getting sustained profits over time without having to worry about losses due to gas or impermanent loss. The team has stated that they expect this shadow farming technique to revolutionize the DeFi market as it will no longer require users having to directly take LP tokens.

Say No More to Fees Limiting Your DeFi Growth

SpaceSwap’s shadow staking has the potential to further revolutionize an already pioneering feature of the cryptocurrency market. Despite its quick growth, DeFi is still very young in its stage of development. There is a lot of room for improvement and refinement. Features like shadow staking are the kind of changes that investors will want, going forward.

With SpaceSwap, users can eliminate one of the biggest and costliest pain points of the DeFi market. The market is all set to explode and with easy, gas-free staking, users can focus more on maximizing their return strategies instead of counting costs.

Having obtained a diploma in Intercultural Communication, Julia continued her studies taking a Master’s degree in Economics and Management. Becoming captured by innovative technologies, Julia turned passionate about exploring emerging techs believing in their ability to transform all spheres of our life.

Lattice is set to solve the issues of latency and high transaction fees that hinder exchanges with a streamlined...

Customers would be able to earn 1% on their deposits for 84 days. Currently, deposits of as low as...

Binance expects its users to transfer their holdings to its US subsidiary which, though regulated, is not yet available...

According to the report, Grayscale had about $5.9 billion in assets under management. Interestingly, this has recorded a massive...